Photographing the Landscapes of the Impressionists 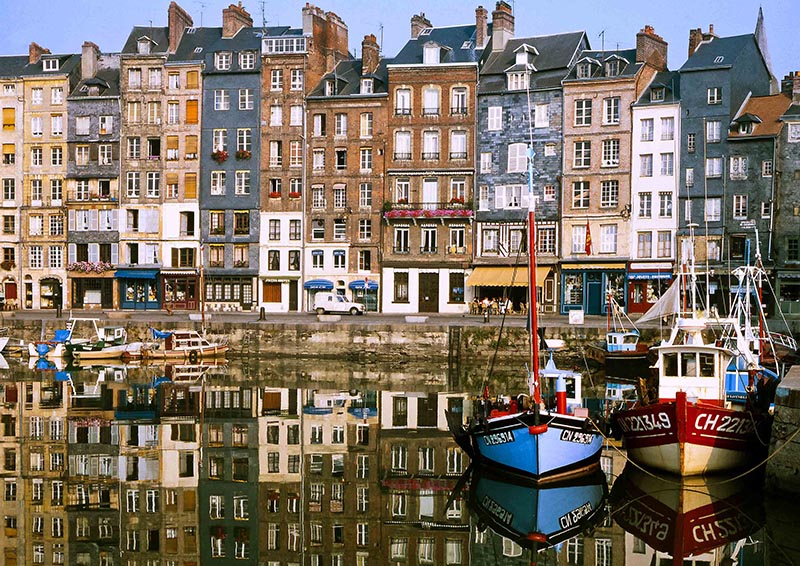 I have always considered the impressionists would have made great landscape photographers. They were constantly inspired to paint the landscape, attracted by the quality of light reflected on water, flowers, foliage and buildings. Claude Monet in particular strived constantly to capture the light of a scene in a fleeting moment.

The suburbs of Paris, the Seine valley and the Normandy coast were a magnet for their art as was the Forest of Fontainebleau and the area surrounding Moret – sur – Loing and St Mammès where the Loing meets the Seine, south of Paris.

Their art has always inspired me as a landscape photographer and I am constantly drawn to the images of Monet’s home and garden at Giverny. However the work of lesser known Alfred Sisley, born of English parents in Paris, has also appealed to me and I have made several trips to each of their regions to photograph the landscapes in which they worked.

For the landscape photographer these regions provide the opportunity to capture a scene which has hardly changed since the days of the impressionists. In many locations, the very buildings which appear in their paintings still exist today.

The Normandy coast in particular provides a wealth of impressionist scenes and the artist’s fishing village of Honfleur is a gem. I prefer arriving early when the morning light captures the facade of the old buildings surrounding the harbour with reflections at their best.

Honfleur is sometimes called the home of impressionism. Drawn by the picturesque setting, views of the sea and the Seine, a group of artists took a farm just outside Honfleur called Saint-Siméon. Within this group were such names as Corot, Boudin, Jongkind and Monet. Boudin in fact was a native of Honfleur and became something of a mentor for the young Claude Monet, developing his talent for skies, sea and the effect of light on changing atmospheric conditions. Today the legendary Saint-Siméon is a luxury hotel.

Further east along the coast are the intriguing cliff formations of Étretat. These became a favourite subject for both Boudin and Monet. Monet in particular returned there as an old man to reflect on the many times he had spent there striving to capture the light and the movement on the sea. My visit was on a spectacularly warm June day and as I waited for the late afternoon light, it became very thundery and overcast, providing one of those rare moments of strange light which makes everything appear as through a tobacco filter.

From the Normandy coast our search for impressionist’s landscapes takes us south of Paris to the region of Fontainebleau. Monet, Sisley and Renoir were all attracted to this forested region but only Alfred Sisley decided to remain and set up home at Moret-sur-Loing on the edge of the forest. Sisley was frequently joined here by Pisarro and Renoir. Little has changed in this area and the scenes they painted along the banks of the Loing are clearly recognisable today.

Sisley loved the qualities of water and sky along the banks of the Loing as it stretches out to meet the Seine at St Mammès. Here it offers both artist and landscape photographer a selection of greens and browns punctuated by riverside houses, barges and occasional fishermen.

The medieval town of Moret has hardly changed since Sisley’s time and the church and town in its dappled stone were subjects which he frequently painted during his life of penury. His paintings seldom sold and his wife and family often had to flee his creditors. When he died of cancer in 1899, ironically art dealers were seen fighting over his canvases, which they belatedly regarded as worthy investments.

I make no apologies for completing this photographic exploration in the area I most associate with impressionist landscapes. Claude Monet lived for many years close to the Seine in the villages of Argenteuil, Vetheuil and of course Giverny. Unfortunately, Argenteuil has suffered more from the ravages of modern times and offers limited opportunity to photograph impressionistic scenes.

However, nowhere can you appreciate more the landscapes which appealed to Claude Monet and his friends than the area surrounding Vétheuil and Giverny. Alongside the poplar and willow banks of the Seine and the Epte the summer landscape can be further enhanced by fields of wild flowers and an impressionistic spread of poppies.

The church and village of Vétheuil fit beautifully into the landscape, the steep brown roofs and cream stone, so characteristic of the area were painted many times by Monet during the years 1878 to 1883. The church itself is perched high above the tumbling village and overlooks one of the wide curves of the Seine before it flows under the chalk cliffs on its way to Giverny.

Monet always claimed this region was where he found nature. Once asked by a visiting journalist to see his studio, without hesitation Monet walked to the window of his house, threw it open and pointed to the landscape surrounding Vétheuil. “Viola!!” he replied.

It was here that Monet fell in love with nature and painted in all weathers and light.
I too have felt an empathy with the landscape around Vétheuil. During one of my visits I spent time on the banks of the Seine looking west towards Lavacourt on the opposite side of the Seine, the skyline broken only by willow and poplar. It seemed the very shapes of the trees and their position on the riverbank had changed little since Monet had included them in his paintings.

Giverny of course was the village which provided the final home for Claude Monet, the home where he established his now famous garden and where he painted his water lily panels. So much has been written of Monet’s life at Giverny that any further narrative seems superfluous. I have visited the village and garden several times and am constantly drawn to its location.

I find the garden in particular a challenging location for photography. From time to time I have endeavoured to experiment with various forms of ‘impressionistic’ style photography. Pushing film speeds to produce an ultra-grainy effect, centre spot filters and diffusers have all been used and can actually provide an acceptable image. Perhaps the most successful method has been breathing on the filtered lens of my Olympus OM1 and waiting for the effect to slowly disperse. This caused much amusement to some Japanese visitors, who were later seen breathing over the lenses of their compact cameras.

However when experimenting like this I frequently question my methods, when really all that is needed is composition, light, reflection and nature. Perhaps on my next visit I will try a Pinhole camera - just light, time and save on the breath. Now that really must be getting nearer to impressionistic landscape photography. 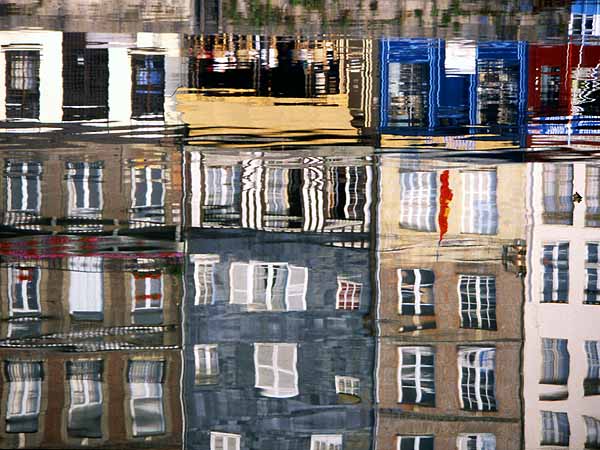 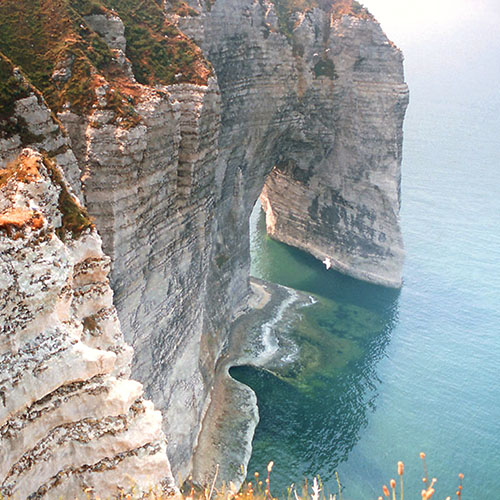 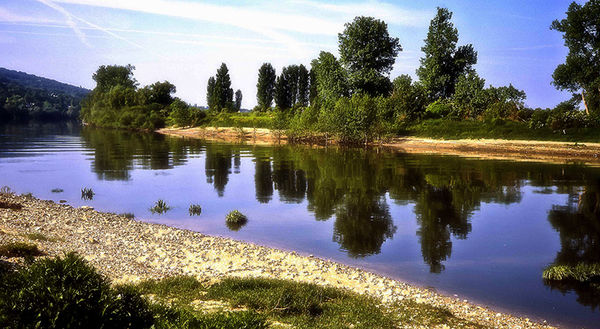 Vetheuil, The Seine with Poplars 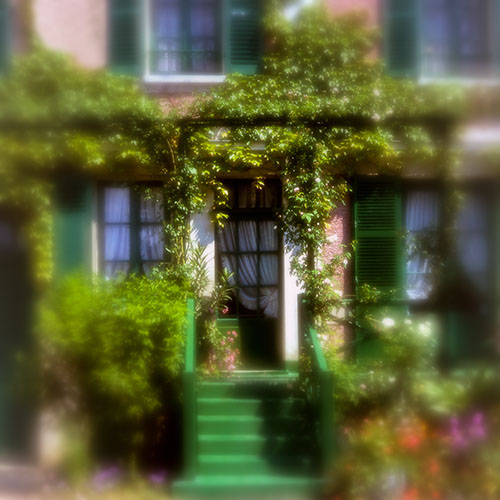 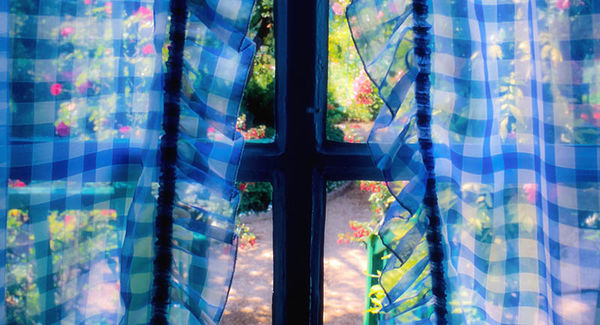 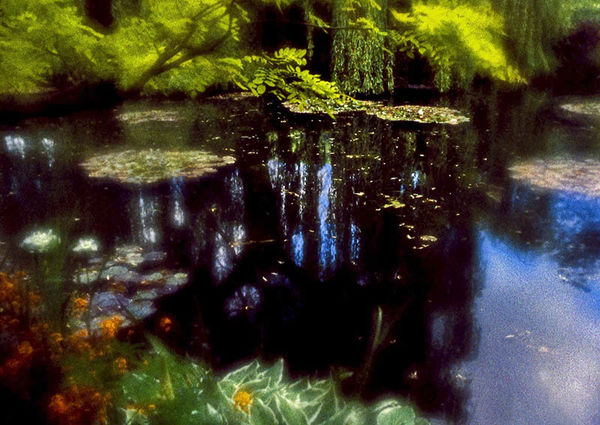 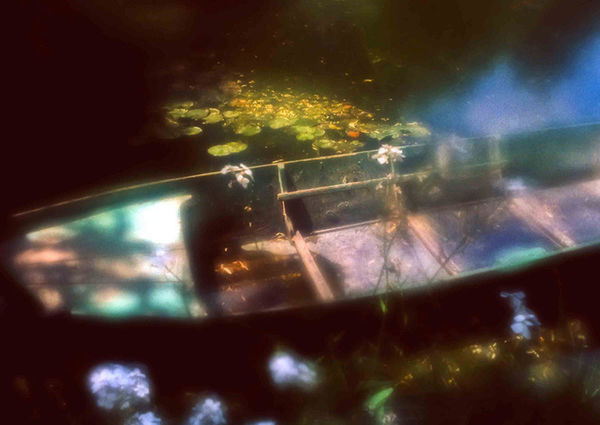