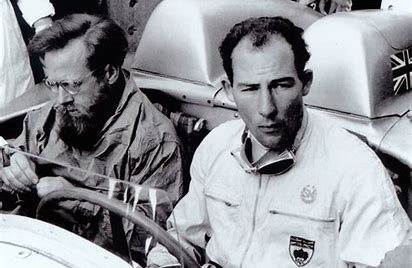 Stirling Moss at the wheel of the Mercedes with Denis Jenkinson 1955 Mille Miglia
Today, 12th April 2020 amid the continuing news of the COVID 19 pandemic I learn of the death of a motor racing legend – Sir Stirling Moss OBE at the age of 90.

I have been a motor racing fan for almost my entire life and during this time Stirling Moss was a child hood hero of mine and remains so to this day.

Living in Dorset in the south of England my first memories of motor racing were being taken to Blandford Camp by my grandfather to watch the racing cars – I must have been little more than 4 years old at the time when Stirling Moss drove a 500cc Cooper to victory at Blandford Camp Hill Climb on May 28th 1949 but I must say I cannot remember the day. I do however recall the amazing sounds and smells from those early motor racing days.

Stirling Moss also continued his early successes at the Castle Combe circuit in Wiltshire when in October 1950 driving a 500cc Cooper he secured further wins and I believe he also raced a Frazer Nash sports car on the same day. Little did I know in those days that in the mid 1960’s I would also be driving competitively around that same Wiltshire circuit but alas without the same degree of success.

Motor racing events organised by the West Hants and Dorset Car Club also took place at Ibsley (the former RAF Ibsley near Ringwood in the New Forest, now the nature reserve of Blashford Lakes). Here raced some famous motor racing names from the 1950's, Mike Hawthorn and Roy Salvadori to name just two who were to play a major part in the motor racing career of Stirling Moss. I may be wrong but I am not sure if Stirling ever raced at Ibsley.

I still have a copy of Stirling Moss’s Book of Motor Racing given to me by my grandfather, it was my first motor racing book and is still one of my most treasured possessions.

Stirling Moss was widely considered the greatest driver never to win a Formula One World Championship. He finished runner-up four times and came third three times in a career during which he won 16 Grands Prix.

There were many legendry races in his career but for me Stirling Moss will personally be remembered for his amazing victory in the 1000 mile Italian road race of 1955 – the Mille Miglia driving the famous Mercedes sports car with motor racing journalist Denis Jenkinson beside him. This winning drive has been described as the "most iconic single day's drive in motor racing history."

Shortly after my book 'Out of the Shadows' was published the publisher sent Stirling Moss a copy to review. The strap line was 'Behind the Scenes of 1960's Motor Racing'. Stirling picked up on this statement on the cover of the book and although complimentary of the photography he did point out that the strapline was slightly misleading insofar as the book did not cover the entire 1960's era and did not include himself or his friend and team boss Rob Walker. I remember feeling a little embarrassed at this but of course my photography commission from Agfa Gevaert only covered the 1968 and 1969 seasons and Stirling's career had come to an untimely end in 1962 with his crash at Goodwood. However at least my hero had seen my motor racing photographs of a much changing era.

Thank you Stirling for enriching such child hood memories, I will always remember him for being a true racer, sportsman and a gentleman.