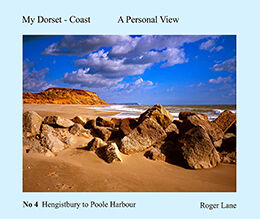 My Dorset Coast Book 4 Cover
Following more than fifty years of photographing his home county of Dorset, Wimborne photographer and writer Roger Lane, reveals in a new series of self-published books some of his favourite images. He recalls many of the opportunities the county’s landscape and people have provided and brings us the stories behind some of his photographs.

The first series of three books concerns the Dorset countryside and rural landscape and now Roger has released a fourth title featuring the coast stretching from Hengistbury to Poole Harbour. In the fifth book of the series Roger reveals the Purbeck coast from Studland to Worbarrow Bay including special features on Swanage, Durlston, Corfe Castle, Kimmeridge with its Jurassic colours and the lost village of Tyneham. Also included is the Dorset Wildlife Trust Nature Reserve at Stonehill Down. The sixth and final book of the series features the Heritage coast from Weymouth to Lyme Regis, including The Isle of Portland, the atmospheric Chesil Beach with stories of history, smuggling and espionage. Also included are features on West Bay, Charmouth and Golden Cap together with the colourful Abbotsbury Sub Tropical Gardens, completing the journey at Lyme Regis with again many a story to tell.

The idea for the books came about during the first Covid 19 lockdowns of 2020 when it was not possible to travel far to photograph the Dorset landscape. Additionally, Roger has become increasingly concerned at the continuing loss of green belt land and new developments which are endangering much of Dorset’s landscape and wildlife habitats.

Roger’s images take us back to the 1960s through to the present day and include some of his photographs not previously seen, others are from previous publications including Cranborne Chase-a secret landscape, Landscapes of Dorset, Villages of Dorset and Gardens of Dorset.

In a revealing introduction to each book Roger explains his personal view of the loss of much of our rural landscape but also provides a significant level of assurance in the fact that we are exceptionally fortunate to have the county’s largest nature conservation charity, the Dorset Wildlife Trust. It has 28,000 members, volunteers, and supporters all championing our wildlife and natural places. Since 1961 this charity has been preserving Dorset’s environment with currently some 42 nature reserves under their management.

Creating public awareness of wildlife and landscape protection in addition to offering advice to landowners in their fight to prevent inappropriate development has been one of the Trust's main missions. In this respect, Roger explains, they work tirelessly to influence the decision-makers right up to the central government level in their fight to protect Dorset's unparalleled natural heritage for future generations.


PLEASE NOTE
It is with regret that I have decided to remove my self-published books through BLURB.
Unfortunately BLURB have increased material and printing costs twice during 2022 and
there is an availability issue from their printer in shipping to the UK
In my personal opinion this no longer renders the publications viable and following many concerns
from prospective customers regarding the prices I have been forced into withdrawing their availability
due to limited sales.
I will continue to review the situation but self-publishing is increasingly becoming a difficult area particularly
in respect of non-fiction regional publications.
I sincerely apologise for any inconvenience this may cause.
My Dorset Country - A Personal View BOOKS 1,2 & 3
Cranborne Chase - A Secret Landscape
Next
Previous