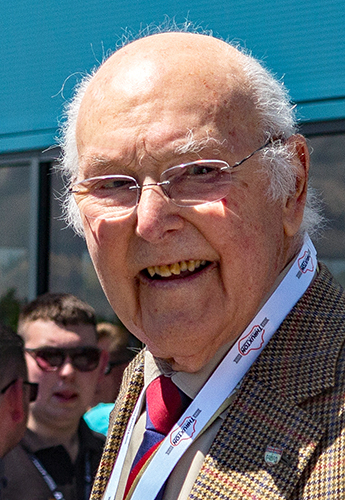 Sadly, Murray Walker died at the age of 97 on Saturday 13th March 2021.
Without doubt he was the doyen of motor sport commentators, with his iconic voice, infectious enthusiasm and total dedication to his craft, the like of which we are unlikely to see or hear again.
In my younger days I used to listen to John Bolster and later Raymond Baxter bringing me the late night news on BBC from Le Mans, the Monte Carlo Rally and other motoring events from around the world but it was Murray who really brought alive the spectacle, drama and sometimes tragic events from the Formula 1 circuits.
I had the pleasure of meeting him on several occasions and he always had time for a chat, always courteous and with a genuine smile. My photo was the last one I took of him when alongside Nigel Mansell he opened the new Thruxton Hospitality Centre on the day of Thruxton's 50th Anniversary in June 2018.
The sport has lost a true legend and a world champion commentator.

I was tremendously privileged to have my images used in the video interview Murray Walker had with Tiff Needell prior to Thruxton Circuit's 50th Anniversary celebrations.

Follow the Link below to watch Murray reveal his memories and thoughts about Britain's fastest circuit and the drivers who started their careers there.


Close Up Photographer of the Year 2020
Next
Previous