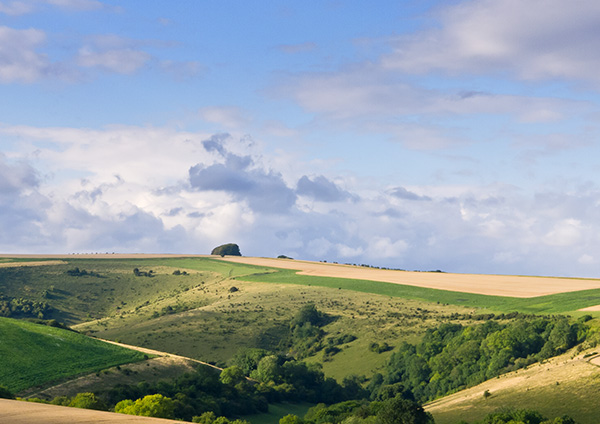 Win Green and the Landscape of Cranborne Chase
Cranborne Chase is an Area of Outstanding Natural Beauty enveloping much of north Dorset, the southern edge of Wiltshire and the western boundary of Hampshire. The Chase is known throughout the world for its wealth of prehistoric sites with 6,000-year-old ‘long barrows’.

Thomas Hardy described this region as “the oldest wood in England” and through these ancient woodlands stretching across the chalk downland, royalty came to hunt in the landscape which became known as ‘the Chase’. The ancient laws of the Chase protected the animals and landscape. Today wildlife and humanity live harmoniously together in a sense of remoteness under wide expansive skies in a secret corner of southern England.

I have often heard Cranborne Chase described as a secret landscape and perhaps that is the most appropriate description. It seems to be not too well known even amongst long-standing Dorset and Wiltshire residents.

Driving south from Salisbury in the county of Wiltshire, the traveller takes the A354 towards the Georgian town of Blandford Forum. Along the way the road offers up magnificent vistas, all sparsely populated. Occasionally there are distant views of woodland with glimpses of what appear to be ancient burial mounds. Nowhere do you see a signpost to Cranborne Chase, just the village of Cranborne signposted to the east of the A354 at a windy outcrop where the road is crossed by the B3081 linking Cranborne with such intriguing village names as Sixpenny Handley and Tollard Royal.

This area is almost the epicentre of the real Cranborne Chase, which lies both east and west of the main trunk road, hidden away from the passing traveller. Here the history of the Chase unfolds amongst the villages and woodland which have created this landscape over centuries.

It remains a landscape which provides a painting of its past with its open down land and wide expansive skies, dramatic escarpments and panoramic viewpoints. It even provides a sculptured view with its valleys and combes and, although a richly agricultural landscape, it remains peaceful and largely unspoiled with its own sense of remoteness.

Perhaps the most relevant way to describe this location however is to revert to the master himself, Dorset writer Thomas Hardy, whose novels embrace the landscape so well and Cranborne Chase in particular in Tess of the D’Urbervilles:

“the soft azure landscape of the chase – a truly venerable tract of forest land, one of the few remaining woodlands in England of undoubted primaeval date, wherein Druidical mistletoe was still found on ancient oaks, and where enormous yew trees, not planted by the hand of man, grew as they had grown when they were pollarded for bows”

To me Cranborne Chase will always feature Win Green, a familiar landmark clump of trees which is the highest point in Cranborne Chase and lies just on the Wiltshire side of the boundary. At 910 feet (277 metres) there are panoramic views from its summit, where the entire Chase can be seen with distant landscapes stretching as far as the New Forest and the Hampshire Solent in one direction and to Dorset’s Purbeck Hills in the other, with Wiltshire to the north and Somerset to the west beyond the ancient town of Shaftesbury.

Amongst the trees of Win Green where the wind whistles through the canopy of branches reaching towards the sky, where buzzards and falcons ride on the thermals in search of prey, it can seem a magical place if somewhat eerie. Here, thoughts of ancient rituals and culture spring to mind as the landscape offers its secrets so steeped in legend.

From Win Green, the Ox Drove can be accessed for more than 10 miles (16 kilometres). This is one of the great cross-country ridgeways which have been used by man for centuries. In fact it is not difficult to visualise a rural character from one of Hardy’s novels surrounded by a herd of sheep traversing the spectacle of Win Green en route to Salisbury or another field along the Chalke Valley.

The Ox Drove’s origin is considered to be a prehistoric ridgeway and would have been one of the main east–west travelling routes for trade during the Bronze Age. It later became a means of moving livestock. Today it forms a most suitable walking trail with distant views of the Chase landscape.

The rural ambience along the Ox Drove leaves the mind to wander back in time in a landscape which has seemingly changed little since hawkers, pedlars and even smugglers would no doubt have passed along the route with all manner of provisions, both legal and otherwise. The drove is also intersected by the Roman Ackling Dyke near to Ebblake and again near Win Green, allowing the mind to visualise legions of Roman soldiers passing through.

It is a wonderful place to experience silence and for much of the way the Ox Drove passes through hedgerows which can be bright with wild flowers in summer. Even within the occasional woodlands which provide a brief canopy of green, the silence can only be broken by the song of birds enjoying life along this natural sanctuary.

It is not surprising that writers and artists have followed Thomas Hardy’s appreciation of this landscape, Photographer Cecil Beaton entertained and photographed royalty and the world’s stars at his home in Broadchalke and the late Terry Pratchett also made his home in the Chalke Valley, being much inspired by the surrounding landscape for his writing.

It is truly an amazing landscape worthy of much more in depth exploration than I can possibly provide here, so perhaps delve into the pages of my book, Cranborne Chase – a secret landscape, to discover more.

INNTRAVEL are a company based in Yorkshire who provide guided walking holidays in the UK and overseas.

Related holidays & further information see my LINKS section or CLICK on the LINK below:
INNTRAVEL.

The Hardy Way
Whether you’ve read Thomas Hardy or not, you’ll be seduced by the idyllic landscapes, charming villages and high-quality inns featured on INNTRAVEL's 6-night walking holiday along the Dorset-Wiltshire border. CLICK on the LINK below for more information:
THE HARDY WAY

If you are a Thomas Hardy reader and love walking CLICK below to read a feature which will certainly inspire you:
HARDY FOR HARRY

CRANBORNE CHASE - A Secret Landscape
To see more of Roger's wonderful images, we recommend his recent book, Cranborne Chase – A Secret Landscape, which takes readers on a photographic journey through this historical and atmospheric corner of southern England.

PLEASE NOTE: The original book is now out of print but Amberley Publications are now preparing a revised edition to be available on 15th March 2023
The new book can be reviewed and pre-ordered using the Link below: